It was hardly a cold, dark winter for our city’s nightlife, and spring came with new parties blossoming everywhere. There’s too much of a good thing happening already, and San Francisco summer is arriving with a serious lineup of happening good times. Are you ready?

Gay Day Great America on May 22 is a sweet kickoff to the season, with rollercoaster rides and great shows, including the Trannyshack stage (the Original Fag Hag performs twice, with Heklina and Charisma Glitterati), and shows by Erasure’s Andy Bell, drag Tupperware Lady Dixie Longate, and the always fierce Flava. Dance into the night with the adorable dancing DJ duo The Perry Twins.

Saturday May 23 brings dance parties for every persuasion, from furry grrry action at Bearracuda Basement with DJ Matt Consola at Wunderland, to drop-your-pants-and-dance grooves at Underworld at Space 550 with DJ Kevin Lee, to Asian-inspiration Shangri-La at the Endup with DJ Pegasus.

Sunday May 24 rounds out the holiday weekend celebration, with Trannyshack’s Madonna Tribute Night at Cat Club, bright and bubbly T-dance tunes from DJ Wayne G at Fresh, and extra-manly woofiness for Sanctuary afterhours with DJs David Knapp and Luke Johnstone at 1015 Folsom.

The best thing about our thriving city scene as summer gets underway is that you don’t have to wait until holiday weekends for big and hard entertainment anymore. Your short week back at work after the holiday will barely be enough time to rest before Unity takes over 1015 Folsom on May 30 for DJs Tracy Young and Luke Johnstone. By Sunday May 31 you’ll be ready for some chilled-out, down-home, old-fashioned fun (for a great cause!) at the AEF County Fair in Golden Gate Park. Please stop by my kissing booth for a smooch!

Squeezing it all in will surely take it all out of you, but it’ll be deeply satisfying, and ain’t that why they call it the summer of love in San Francisco, the town we love so much we’d rather vacation right here than anywhere?
Posted by Original Fag Hag at 12:00 PM No comments:

DJ Abel Spins the Fun and Keeps the Flame

Miami-based DJ Abel is a circuit superstar. Period.
On gay dancefloors around the world, he is known by his first name. Like Madonna, or Cher.
He spins regularly in San Francisco, often with his longtime pal and fellow DJ superstar, Ralphi Rosario. Together they are known as Rosabel, and both are celebrating 30-year anniversaries behind the decks this year.
Abel has a special place in his heart for San Francisco, having spun at Universe back in the circuit heyday. “Doing Universe was like going to heaven!” he says. “The way the crowd received me every time I was there was so warm, it was beautiful.”
These days his universe centers around Alegria in New York City, a world-class party where he creates his very own “Universo Alegria” with marathon sessions that consistently bring down the house.
His remix and compilation hits are too numerous to mention, as are the circuit parties around the world where he has made his mark. He continues to make fans everywhere he goes, and he makes them completely rabid for his explosive blend of heavy tribal beats, diva anthems, retooled classics, and afterhours darkness.
Coming up, Abel will spend Memorial Day in Los Angeles spinning what’s likely to be a 12-hour set, before gearing up to play Gay Disney and New York Pride. Once summer is in full swing, he’ll be spinning Pride parties in Brazil, Amsterdam, and Barcelona. He’ll also be at sea on a couple of Atlantis cruises, including the Baltic and the Mediterranean.
This Saturday night he returns to San Francisco to spin at Industry at Mighty, where he’ll share billing with a friend from back in his Universe days, San Francisco’s own DJ Jamie J Sanchez. Abel speaks highly of San Francisco’s taste in music, crediting the city with a wealth of musical talent and leadership.
“I get homesick when I travel, but I feel great about going to San Francisco every time, because I know what I’m getting into when I play in San Francisco,” he says. “The crowd in San Francisco is more about the music than the venue or anything else, and I know I’m ready for that. They better be, too!”
What’s the biggest influence on the kind of set you end up spinning?
The mood of the crowd is one thing I focus on a lot. A lot of people say “We got West Coast Abel,” or “We got East Coast Abel,” but really it depends on the event more than the location. The venue has a lot to do with it as well, and the sound system has a lot to do with the impact I can make on the crowd.
How would you describe your evolution over 30 years as a DJ?
It’s been the most wonderful journey! Watching the music change throughout the years is totally incredible, and at the same time, I haven’t lost too much of what I learned along the way.
When I first started, mixing was very, very difficult, because everything was on vinyl. Mixing two records was a challenge, not like today, when everything’s computerized and you can beatmatch everything perfectly.
The skills that we learned back in that time, a lot of the old-timers can relate to. People like Ralphi Rosario, Frankie Knuckles, and then Warren Gluck and Susan Morabito. You had to have total control of your fingers and your ears to make it happen.
For me, the music itself is not as good as it used to be, and that’s been a challenge, but it’s been beautiful because I still have a little something from back then that I bring to what I’m spinning now. It’s fun to play with those elements today and teach a new generation with those things.
What would you like to teach the new generation of dance music lovers?
The new generation would never think that we were playing music before they were born, or since they were kids, but I’m not ashamed of my age or anything like that.
It’s very important that we teach the new generation what we’ve been through, and what it was like before circuit parties were so polished and pretty like they are now. They might say, “Oh, girl! You’re dating yourself!” but I say no, I should be an inspiration. I’m proud to still be part of this scene 30 years later. 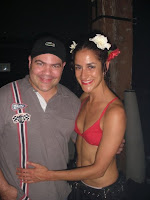 What’s the craziest thing you’ve ever seen from the DJ booth?
It’s embarrassing sometimes, but I can remember a few moments I never expected.
I have a group of fans that follow me from New York to Miami, and on my last Atlantis cruise, they got together wearing these New York City subway t-shirts that spelled my name out on the dancefloor. Subway lines A-B-E-L. That was really cute.
But maybe the craziest thing happened back in 1996, when I was playing at one of the biggest clubs in Miami called Icon. It was a packed Friday night, probably 2,000 people in there, and all of a sudden I see these guys getting on top of the speakers and on top of the bars all over the club. They had ski masks and rifles, and I was thinking “I didn’t know about this show…”
I was laughing, wondering what kind of show was about to happen, and people were yelling at me to shut the music off immediately. Then the lights started coming on and I realized it wasn’t a show, it was a raid! At that time, Prince was the owner of the club, and it was a major raid. They were shutting him down, and it was a shocking moment.
You’ve played all over the world, at just about every major Pride event. Are there any gigs you’re still chasing?
I really have played in every city where a gay man lives. I am lucky enough to say I think I’ve done everything except Sydney Mardi Gras, but that’s coming next year.
Do you think you’re typecast as a DJ?
I’ve read reviews where people say things like “Alegria will always be Alegria, and you always know what you’re gonna get.” To some that may mean I’m tired, but most people like consistency, and consistency has always been successful.
Every legendary club that has been around for decades has had a single DJ or 2 DJs, and people get used to that sound. Where there’s consistency, there’s a consistent crowd. Some new promoters don’t get that, but I’m a firm believer in the idea of a resident DJ. Consistency is why people follow DJs.
I am typecast a little bit. Like when I played at The Pines on Fire Island, that was a big shock for a lot of people, and a lot of people said they had never heard that side of me before.
Fire Island is an extremely picky place to play music. They have a particular sound, which was developed with all the house parties and the beach parties, so when you do a party like Pines, the crowd expects to hear those particular classics, and they’re really serious about it. If you don’t know what classics to play and play them, you’re in trouble!
I had everyone in shock with my selection, and it’s a feeling that I will never forget. In my 30-year history, that was probably the hardest I’ve worked to put a party together. I’ve never done something so intense and so rewarding.
I always said I’d never be able to play Fire Island, but they kept inviting me, and I kept saying “I can’t.” Until the mayor called me himself to ask me to do that party! I ended up being the first DJ in Fire Island history to do the whole party by himself, and to come back a second year and do an encore.
I live for this one acapella track you play all the time, something about “so fuck you”?
(laughs) That’s my signature. I love it!
I love her rudeness, her, pardon the expression, her cuntiness. “You said you’d buy me a big black escalade… You said you’d take me on a trip around the world, but you didn’t, so fuck you!”
It’s an old track, and the actual song itself doesn’t sound that good, but that’s a classic for me. The Alegria classics are the ones that I bring out at special moments. Songs like “La Puta, which is my voice and Ralphi Rosario’s. It’s actually mine and Ralphi’s cat fight over the phone!
“Kiss My Ass!” is another one, as is “Free My Ass.” (laughs again) People sometimes forget to have fun in the clubs, and sometimes you need to remind them, and that’s why I do that. It’s a release, to make people laugh and giggle.
Only me and Ralphi and a few others do that, and to me that’s 30 years of experience.
Posted by Original Fag Hag at 12:00 PM No comments: