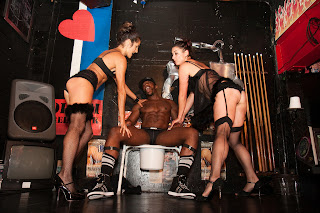 Given that I moved to San Francisco to make a career of being the most dedicated fag hag I can be, there isn’t much I haven’t done or seen. My “bucket list” of experiences no other girl has ever had has dwindled away, with the exception of gaining entry to Blow Buddies or Steamworks. (It’s not like I haven’t tried, trust.)
I’ve been to the legendary Black Party, I host a monthly party at the infamous Powerhouse, I’m part of the working group that produces Real Bad, and I even hold a leather title of my own (Miss Heart Throb 2010), thanks to the Castro Lions. But there is one event that still qualifies as fantasy territory for me, and when I attend my very first International Mr. Leather in Chicago this Memorial Day weekend, I’ll know I’m legit.
In my mind, it’s like Disneyland meets Tom of Finland – a major city teeming with bulging biceps and baskets, daddies and slaves, tops and bottoms (bottoms and liars, more likely, but I digress). That I’m attending at the invitation of porn pimp Ricky Sinz, to perform at the Sunday night War Party at V Live with two great friends, Joanna Parks and Race Cooper, at a party where “godfather of house” Frankie Knuckles will be the DJ? I die.
I’ve heard people say that this 32-year-old event ain’t what it used to be, but what is anymore? People say this kind of thing about many of the parties I hold dear as a veteran lover of gays, but any event is exactly what you make of it. The payoff depends on whether and how you personally bring it.
I’ll be keeping company with the boys from Dungeon Beds, Mr. S Leather and Folsom Street Events, so I have no doubt that our party-within-a-party will always be the place to be. I’ll be dancing more than fucking, and I know I’ll be inspired by the eye candy. I’ll be spreading the spirit of San Francisco, and showing due respect for the gay “old guard,” for which I consider myself head cheerleader. I may have girly bits rather than manhood in my leathers, but Daddy Suzan loves her leathermen just as much as the next guy.
If we’ve never met, please come introduce yourself at Forsaken on Friday night at the Jackhammer. We can giggle over my favorite game of “I’m gayer than you are” and watch leather history unfold and evolve. Wouldn’t it be amazing if San Francisco took home the IML title for the first time since 1992? I’ll do everything I can to support Mr. SF Leather 2011 Darren Bondy, and to bring some tales of the city to and from the Windy City.
Posted by Original Fag Hag at 12:00 PM No comments: