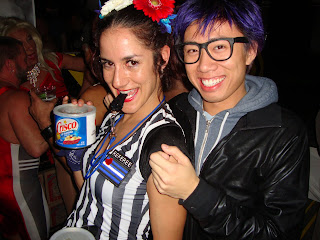 The Original Fag Hag isn’t for everyone.

I’m often the odd gay man out, on both sides of the fence. I’ll never be fully assimilated into Castro culture (though I’m as fully assimilated as anyone without a penis could be), and I’m not really accepted or acceptable among straight folk, either.

I’m not only fine with this, I live for this, and the people who are nearest and dearest in my life are the ones who really “get it.”

My life story is pretty much “Love me, Love My Gays.” It’s simple, and surprisingly subversive. Explaining it to everyone who asks is the best way I know to become a fully self-actualized gay.

One of my favorite ways to break down barriers and stereotypes is to just put myself out there. Right in the middle of things, exactly where I supposedly don’t belong.

I’m basically a size queen when it comes to the huge pride I take in being part of groups that normally wouldn’t have me. The Real Bad Working Group that puts on this city’s finest leather party of the year is one example. Another is Castro Dads, the gay parenting group I recently joined in my own version of the sitcom Modern Family.

Nasty, my monthly “fun-raiser” for the AIDS Emergency Fund at The Powerhouse, has gone a long way toward helping me earn my Gay Card. Many actual gay men are intimidated by such a notorious leather bar, which is exactly why I was enticed by hosting a party there. And Friday, February 5, is going to be the gayest Nasty yet, with Wrestling Night sponsored by Kink.com’s Naked Kombat.

My mostly-straight boyfriend and my mostly-gay F-buddy will be pinning each other for the cause, and this “Battle for The Nasty Girl” perfectly dramatizes everything I love about being gay. In the words of my friend Michael Smith, the talented photographer who makes the Nasty magic happen on each month’s poster, I just don’t have the same problems as other people.

Damn straight. Or not!

Tell me in your own words why you love being gay at www.lovemygays.com.
Posted by Original Fag Hag at 12:00 PM No comments: 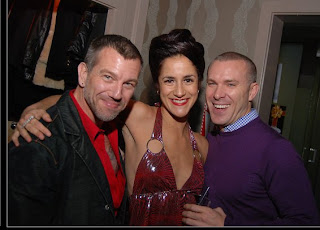 Here’s to a new, as-of-yet unglitterized year!
Having survived the mary and gay of the holidaze makes me want to run for the nearest dancefloor, which is hardly a stretch for the Original Fag Hag, but it is one way of answering the question: How did I get so damn gay?
Boys often ask this of me and my fellow fruit-fly-on-the-front-lines-of-fag-haggery, Janine Shiota, and our short answer is because, once you go gay, you just can’t stay away.
Looking ahead at my gayer-than-gay calendar of events for the year, it’s flamingly obvious that the love and support and fabulous fun this community exchanges is more than just a day in the lifestyle, it’s an essential year-round endeavor.
I’ve already got big plans to get my gay on for weekend and President’s Day weekend. Beyond that there’s Winter Party Miami (my first!), Irreverent Easter in Dolores Park (Hunky Jesus!), and then White Party Palm Springs. I thought I could resist the call of the desert this year, but I had to rethink given the white-hot DJs lined up, and then before we know it it’ll be Memorial Day and Pride, and I’ll be so deep in the glitter I won’t know what to do with myself until I can relax and unwind (ha!) on an Atlantis cruise somewhere.
Deep in the homo mix is where I feel most at home and at peace. The inclusive, accepting embrace of the community I lovingly call my San Framily is where I can truly ground myself by losing myself. Whether it’s at the club, or in drag, or in leather, or working for the cause, being so hella gay is the only way I know how to be, and I wouldn't change that for the world.
What gay goings-on are you most looking forward to this year and why? Tell me in your own words at www.lovemygays.com, or just stop by to check out all the many ways Janine and I love our gays.
Let's make this new decade the gayest one yet!
Posted by Original Fag Hag at 12:00 PM No comments: